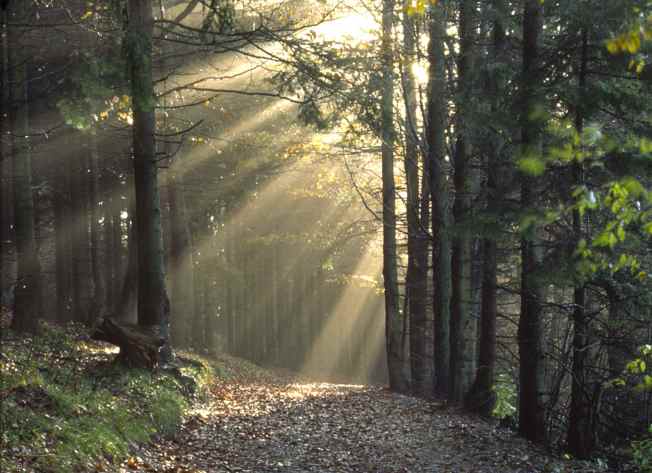 “For what we need to know, of course, is not just that God exists, not just that beyond the steely brightness of the stars there is a cosmic intelligence of some kind that keeps the whole show going, but that there is a God right here in the thick of our day-by-day lives who may not be writing messages about himself in the stars but in one way or another is trying to get messages through our blindness as we move around down here, knee-deep in the fragrant muck and misery and marvel of the world.  It is not objective proof of God’s existence that we want, but the experience of God’s presence.  That is the miracle we are really after, and that is also, I think, the miracle that we really get.”

I usually ignore those little lights on the dashboard.

Our car, a Ford Escort, was born the same year the Euro was introduced*, and is starting to show her age. I’ve decided that the “check engine” light, which has been on for the past 30,000 miles, is the automotive equivalent of arthritis. We’ve taken our beloved car to professionals, performed batteries of tests, and repaired everything from the timing belt to the oxygen sensors, but that red light just stays on. I don’t even notice it anymore.

That’s why yesterday, when the little battery-shaped icon started flickering on and off, I didn’t panic. The car seemed to be functioning at normal parameters and I knew the battery was only a year old. Still, to be on the safe side, I pulled into the NAPA parking lot on my way home from dropping Katie at school, just to have them check it out. (Side note: I love NAPA. The floor and walls and shelves are full of interesting looking parts and gizmos that I don’t understand, the air smells slightly of engine grease, and the employees are always extremely kind and helpful and not condescending at all even though I clearly don’t know a manifold from a manatee.) I told the man behind the counter about the flickering battery light, and right away he knew it was caused by one of two problems. Grabbing one of his many cool diagnostic voodoo devices, he followed me out to the car and hooked its two clips up to my battery. After studying the display for a moment, he announced, “Well, the good news is that it’s not your battery.”

In this case, the “good news” wasn’t so good. A battery costs about $50 to replace. A new alternator, on the other hand, costs closer to two hundred dollars. And a new alternator, he assured me, was what we needed. “How long have we got?” I asked. “Do I need to drive straight to a mechanic, or can I get away with shopping around for a few days?”

“Well, if you turn off your radio, heater, and headlights, you might be fine for a while. Just don’t go out of town. And ma’am? If you stop at 7-11, leave the engine running.”

“A while” turned out to be less than 24 hours. We had made arrangements to have my father-in-law, an auto mechanic who works near Paul’s office, take a look at the Escort this afternoon, but that wasn’t soon enough. This morning, as I was driving Paul to work (we only have the one car), our alternator commenced its death throes. First, the engine started missing. It lurched, and stalled, and lurched again, making a sickly thrumming noise all the while. We were about a mile from our destination. Then I noticed the speedometer had stopped working. Its needle was buried deep under the zero, unresponsive. Next, we lost our turn signals. I switched on the left one to take a corner, and nothing happened. We were about a block away. “You’d better drive straight to the garage,” Paul directed worriedly. “There’s no way you’re getting home in this bucket.”

In the end, the engine cut out (and this is no exaggeration) just as we were coasting into the last available parking space in front of Dad’s garage. In fact, Paul had to push us the last three feet. Talk about timing! I’m thinking it was a God thing.

While Paul went and consulted with his dad on our options (a two day wait for the proper part, most likely), I made phone calls to cancel my eye appointment and to tell Katie’s school why she wouldn’t be in attendance today. We came in from the cold and Paul’s wonderful coworkers set the kids up with some computer games to keep them busy as we tried to decide what to do. Ultimately, Dad loaned us his truck and Paul deposited the kids and I back at home, where we are marooned until such time as our old red tank is ready to roll once more.

Not exactly the best morning, but being a cup-half-full kind of girl, I’m going to count the blessings in this situation. Here they are:

*Paul was with me, so I didn’t have to juggle kids with waiting for rescue and working out the car salvage details.

*We actually know what’s wrong with the car, and we have the money to fix it.

*It’s great to be related to a talented auto mechanic. Between Paul and his dad, our cars and computers always receive the best technical support.

*We didn’t have a wreck, despite having to drive our rapidly decomposing automobile on slick, icy roads.

This Thursday we will celebrate Thanksgiving, a day of feasting, football, and family–not to mention friends, fart jokes, finicky four year olds, and fifty foot parade floats. It’s a day for generations to assemble and share laughter and sweet potato casserole recipes, a day for competitive games of Trivial Pursuit and falling asleep in the recliner with your mouth open. It’s a day to share all the old stories (like the one where Kathy put me in charge of the gravy and I turned it into something resembling turkey-flavored jello.) It’s a day for tradition. And I so love all of that. It’s important, though, amidst all of the foofala, when we’re pushing our chairs back from the table and unbuttoning the top button on our pants in gustatory delight, to remember what the Thanksgiving holiday is all about: giving thanks.

So this week, Thanksgiving week, I’m going to post every day about one of my blessings. I have so many, the only hard part will be choosing seven. Because I’ll tell you right now, I am one very rich girl. My cup runneth over. My heart is full. I am blessed far beyond my deserts. (Desserts? Did someone mention desserts? That could be a whole day of thanks right there…)

Today, the first day of my week of Thanksgiving, I am kicking off the gratitude by giving thanks for my Number One Blessing. Because what I’m most thankful for is also the One I’m thankful to. My biggest, best blessing is that I am a child of God, saved by the blood of Jesus Christ, and heir to an inheritance that will outlast everything else I have in this world. God loves me. He died for me! And now I get to be with Him forever. That pretty much blows all my other blessings out of the water.

So thank you, Father, for the blessing of being a part of your family. I hope my life shows my gratitude.

Dirty House Friends
Dear Girl Doctor
Flying the Whiny Skies
The Marriage Bed
Wax Poetic
It's a Dirty Job
FIMD
I'm So Happy That I Can't Stop Crying
M.M.M.
10 Things I'm Probably Too Old For But Enjoy Anyway
How To Survive the Apocalypse
Prince Charming
Change I Can Believe In
Black Friday
Glue and the Kindergarten Kid
Breaking Up Is Hard to Do
The Horror!
The Candyland Classroom
Confessions of a Mommy Blogger
The Green Police
Attack of the Robot Roaches
The Big Stink
Night Elves and Taurens and Gnomes, Oh My!
Nerdfighting
A Severe Case of Scrapbooking
A Thought on Motherhood
Safe Sex
Fright Night
Between the Pages
Night at the Supercenter
Invisible World
T Minus 10...9...8...7...
Abandon the Outcome
Detour
Redneck Teddy Everybody Else
The Top Ten of Paul
Savage Consumers
Geek Chic
My Secret Shame