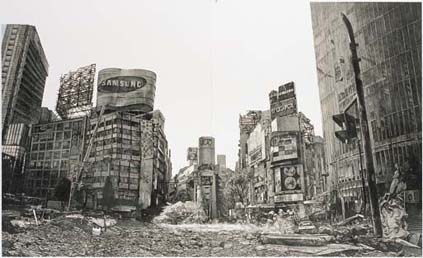 Paul and I went with friends to see Terminator Salvation last night.  The movie was deliciously exciting, a vision of a grimly desolate world in which artificially intelligent machines have undertaken to exterminate mankind with cold brutality.  I loved it.

What can I say?  I have a thing for movies set in bleak, dystopian futures of post-apocalyptic horror:  Terminator,  Road Warrior, The Stand, Matrix, 28 Days Later, The Postman.  Humanity’s last struggling remnant fighting for survival in a dying world is a recurring theme in the movies.  True, it’s not so cheery.  But as fans of the genre know, bleak, dystopian futures make great backdrops for showing off the indomitable nature of love and the triumph of the human spirit.

The important thing to remember is that it’s much easier to enjoy the end of the world (and all its fashion possibilities) when you live long enough to see it.  What can you do to insure that you are among the small band of courageous survivors struggling to rebuild society in the husk of a burned-out Walmart using a gas-powered generator and a battered copy of an eighth grade history book?  I’m glad you asked.  I’ve given the matter a lot of thought, and I’ve come up with a basic primer that increases your chance of surviving the coming cataclysm from a meager 2% to a robust 2.8%.

Tips for surviving the apocalypse:

1.  Arm yourself. Apocalypses come in all varieties–nuclear, pandemic, mechanized, and, of course, zombie**–so the type of weapons you’ll need may vary according to the threat.  Assault weapons are good for fending off the roving bands of lawless thugs that inevitably emerge to loot and pillage the countryside as society collapses, whereas an industrial-sized can of Lysol and a hazmat suit might serve you better if the government accidentally releases a deadly plague from an experimental test facility in the Nevada desert.  And everyone knows that the best zombie deterrent is a sturdy cricket bat.  (As an added bonus, you don’t even have to buy ammunition for it.)

*2.  Dress for success. Almost anything can be incorporated into post-apocalyptic couture: chest armor made out of hubcaps, discarded aviator goggles, fraying sweaters patched together with wire torn from now useless computer consoles.  Utilitarian chic, I call it.  Just be sure, when you’re choosing the dirty rags you’re going to be wearing for the next few years, to avoid bright colors.  Bright colors make it easier for the zombies/desert warlords/sentient death machines to find you.  Better to blend in with the debris.

3.  Acquire transportation. Think “all-terrain”.  The post-apocalyptic vehicle has to be able to roll over broken glass and skirt around washed-out roads.  It must be able to keep going even after being riddled with bullets and pancaked between a speeding semi-truck and a cannon-bedecked school bus.  A tank is the best choice, but a jeep or a Humvee will do in a pinch, especially after you weld three-inch steel plates all over it and mount an Uzi to the roof.

4.  Get some skills. You definitely can’t survive the apocalypse without useful skills.  Unfortunately, there’s no way of knowing ahead of time which skills will be useful in your individual circumstances.  For example, suspending the chassis of a defunct sixteen-wheeler a hundred feet in the air in preparation for dropping it on enemies who stumble onto your hideout in an abandoned toy factory requires a proficiency with winches and industrial strength cable.  Rigging an ancient ham radio to broadcast a signal out to other survivors across three continents, on the other hand, demands a working knowledge of transmitters, frequency, and electromagnetics.  Since there’s so much to learn, I suggest you start now.  Get to the library and check out books on subterranean agriculture, first aid, basic tank maintenance and repair, and hand to hand combat.  You might also want to take a cooking class, specifically one that specializes in creating healthy and nutritious meals out of expired canned goods, dog food, and whatever roadkill can be scraped out of your tank treads at the end of the day.

5.  Group up. Look for other survivors.  But be cautious.  Before throwing in with the first fellow refugees you see, observe them carefully to make sure they are not a) insane, b) violent criminals, or c) insufferably annoying.  This especially applies to people of the opposite sex, as there is a high probability that you will fall in love with one of them, get married in a casual civil ceremony over a wedding cake made of scavenged Twinkies, save each other repeatedly from those roving bands of lawless thugs, and feel honor-bound to do your part to help repopulate the earth.  On the positive side, the standards of beauty go way down when 98% of the world’s supermodels aren’t around for comparison.  Anyone with more than two teeth and the ability to string a complete sentence together should easily be able to find a soulmate after the armageddon.

6.  Start accumulating SPAM. As my brother-in-law pointed out to me, SPAM is truly the lynchpin of post-apocalyptic survival.  It’s portable, it’s packed with protein, and, properly sealed, it has a shelf-life of one million years.  (Note to nuclear meltdown survivors: irradiated SPAM lasts even longer.)  Also, while still in the can, it makes a handy blunt weapon, good for fending off marauders who are trying to make off with your carefully hoarded SPAM supply.

This concludes your disaster survival tutorial.  Of course, these are just the basics.  To a great degree, the end of the world is a learn-as-you-go proposition, so don’t worry if you never get around to taking those welding lessons or ordering that AK-47 off of ebay.  When the big one hits, just slip a can of SPAM into your pocket and take to the streets.  In the end, you’re only a little less likely to make it to Tomorrow-morrow Land than the rest of us.

I’ll even save you a seat in my tank.

**Zombie Apocalypse would be a good name for a rock band. 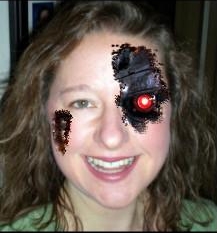 Dirty House Friends
Dear Girl Doctor
Flying the Whiny Skies
The Marriage Bed
Wax Poetic
It's a Dirty Job
FIMD
I'm So Happy That I Can't Stop Crying
M.M.M.
10 Things I'm Probably Too Old For But Enjoy Anyway
How To Survive the Apocalypse
Prince Charming
Change I Can Believe In
Black Friday
Glue and the Kindergarten Kid
Breaking Up Is Hard to Do
The Horror!
The Candyland Classroom
Confessions of a Mommy Blogger
The Green Police
Attack of the Robot Roaches
The Big Stink
Night Elves and Taurens and Gnomes, Oh My!
Nerdfighting
A Severe Case of Scrapbooking
A Thought on Motherhood
Safe Sex
Fright Night
Between the Pages
Night at the Supercenter
Invisible World
T Minus 10...9...8...7...
Abandon the Outcome
Detour
Redneck Teddy Everybody Else
The Top Ten of Paul
Savage Consumers
Geek Chic
My Secret Shame